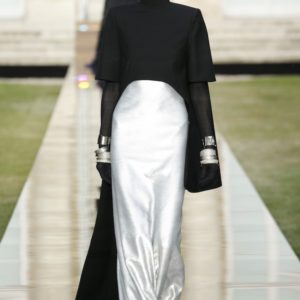 Claire Waight Keller, still basking in the fame of designing the royal wedding dress for the Duchess of Sussex, has recently showcased her autumn /winter 2018 couture collection for Givenchy exploring the deepest archives and relationships of the Parisian fashion house.

Hubert Givenchys’ relationship to his celebrity designer title was the recurring theme of the show, most iconically with Audrey Hepburn, set the scene within the elegant garden of Paris’s Archives Nationales. Throughout the show homage was paid through Waight Keller and her 87 looks to the late Hubert Givenchy who has evidently been the muse for the 2018 collection after his death in February of this year, talking with Vogue backstage about his influence to her creations she said, “ he felt very present in my mind; his legacy felt like something that needed to be celebrated…”

The scene was set by the archives of Givenchy, behind Claire Waight Keller and in a book on every chair was pictures of Hepburn through the 1950’s to the 70’s in Givenchy gowns following suit, down the silver mirrored runway began modern adaptations of the archives presented. His relationship with the actress being so well known Waight Keller highlighted Hepburn’s Givenchy pieces that were less known such as ‘capes, the peekaboos, the architecture, the flou. . . . ‘

Naturally, the show held the classic Givenchy DNA as Waight Keller adapts the infamous structural garments to a new Givenchy as fashion has evolved materials have adapted from when Hubert Givenchy created them himself, making them heavier than today’s. Among the changes from the archives stood Audrey Hepburn’s original pink and white piece but adapted to a cape – back top and skirt in a contemporary black and silver, which opened the show. A modern hood was added to Hepburn’s recognised Breakfast at Tiffany’s dress with the removal of the string of pearls. The archives were brought back to 21st Century life through the simplicity of silhouettes and lines as well as decadent embroidery, reflecting on the past as well as evolving to the future.