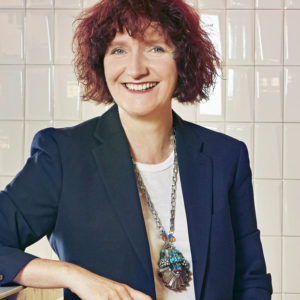 This week, the Condé Nast College welcomed art director, Fiona Hayes over Zoom for an industry talk about her sparkling career in magazines over the past 30 years.

Fiona Hayes has been an art director for titles such as  Russian Vogue, British House & Garden, GQ India, and British and Russian editions of Cosmopolitan.

She has also run design and production teams in New York and London for contemporary art auction house Phillips de Pury, and spent two and a half years based in Munich with Condé Nast Germany.

Between 2013 and 2019, as art director of Condé Nast International, she worked on the launch of 14 magazines, including seven editions of Vogue – Thailand, Ukraine, Arabia, Poland, Czech Republic, Greece, and Hong Kong.

In the summer of 2019, she set up a consultancy, Fiona Hayes Studio. Through this, she has spent the past year as Art Director of Fashion Brands for Russian luxury conglomerate Mercury LLCM, working between London, Paris, and Moscow, and running a team of 17 designers in Moscow and St Petersburg.

Fiona is Consulting Design Director at Large for Vogue Hong Kong, and is currently working on a fashion photography yearbook with a German publisher, due to launch in spring 2021.

Fiona’s talk was called Vogue Family Album: A Visual Guide to the New International Editions and explored how Vogue has evolved and the global nature of the Vogue image.

To give us context, Fiona’s visual tour began in 1909 when Condé Montrose Nast bought Vogue magazine.  She explained how he launched the first generation of Vogues – British Vogue in 1916 and Vogue Paris in 1920.  Fiona talked us through iconic images by Horst, Penn, and Beaton who were the photographers of the day laying the foundations for the worlds’ most influential global media brand.

As Vogue has expanded into new markets the identity of Vogue magazine has evolved but the visual values have stayed the same.  It’s about absolute excellence, pushing boundaries and the contemporary nature of the image.  She used a quote from Franca Sozzani which clearly illustrates her argument and made us all think:

“Everybody knows about fashion through the internet, everybody can become a blogger or a fashion critic, so fashion is part of the life of everybody today, more than it was in the past. So, to use fashion in a way to communicate something else, I think, is very interesting.

There are now 26 editions of Vogue globally.  Fiona showed us thought-provoking covers and images from the launches of seven Vogues she has worked on most recently, particularly Vogue Arabia, Vogue Hong Kong, and Vogue Greece.  She told us about the more creative and controversial choices of images from Vogue Portugal and Vogue Poland.

It was a privilege for our students to hear from her and they had so many questions for Fiona at the end of the talk, which she answered with so many fascinating stories!.  We are so grateful that Fiona shared her knowledge, expertise, and experiences with our students.