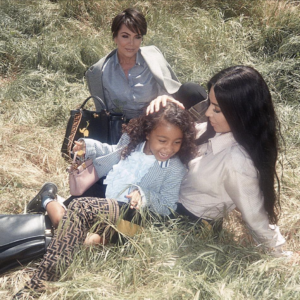 The Kardashians may be famed for their super glamorous photoshoots, but this summer they’ve taken a much more familial route for Fendi.
Five-year-old North West, was destined for fashion stardom from the moment she was born and now, along with her Mother Kim Kardashian West and Grandmother, Kris, she is starring in Fendi’s latest campaign, celebrating the 10 year anniversary of the brand’s famous Peekaboo bag.
Shot in a candid, home video style in a grassy field in Malibu, the short film records the trio all sporting the iconic bag – North carries her own mini version.
The film is the second in a #MeandMyPeekaboo series to echo the family values of the brand – the first film featured Silvia Venturini Fendi, creative director for the house, with her daughters Delfina and Leonetta.
The moments that the camera has captured feel genuine and intimate which is echoed by Fendi’s forthcoming collection which includes heritage coats and the double F print alluding to authenticity, as it strips back to the core messages and values of the Fendi family.