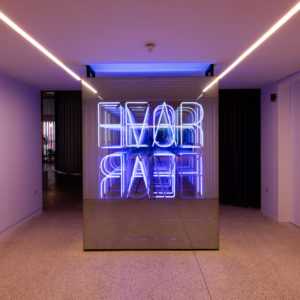 11 innovative installations, curated by designers from around the world, comprise the (re)opening exhibition of the Design Museum. An astute exhibition, ‘Fear and Love’ explores, and subsequently illustrates, the means through which design is integral not only to commerce and culture but also to numerous global social, political and economic issues that are defining our time.

Directed by the newly appointed chief curator Justin McGuirk, each exhibit addresses a separate issue, from perturbing advances in science and technology to widespread feelings of political and economic instability. The simplicity of the exhibition’s design compounds the impact of the installations on the onlooker, emphasizing their mysterious, almost otherworldly aura.

Whilst every exhibit resonates with the theme of Fear and Love, OMA’s in particular has been drawing crowds. The architectural practice founded by Rem Koolhaas, has designed a Pan-European Living Room furnished with pieces from each of the 28 EU member states, in the center of the room falls a vertical blind illustrative of a barcode. A response to Brexit, the installation emphasizes the importance of cooperation and trade in maintaining a collaborative and cohesive society. 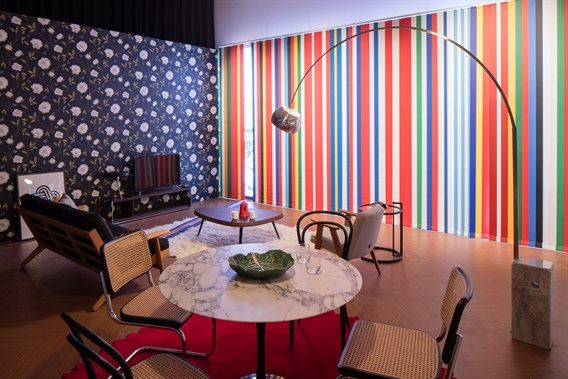 Perhaps my favorite conceptualisation of Fear and Love is evoked by the following two exhibits when viewed in conjunction with each other. The first, a 1200kg industrial robot, transformed by Madeline Gannon into a mechanical robot named Mimus, illustrates of the potential for artificial intelligence to dominate society. The second is Metahaven’s aptly timed film, which brings into focus the contrast between the hype surrounding the aforementioned artificial intelligence and the animal intelligence we so often devalue and overlook. Supporting the anti-whaling wildlife organisation ‘Sea Shepard’, the installation proposes a more empathetic outlook as the means to combat the fear surrounding progressive and consuming technologies. 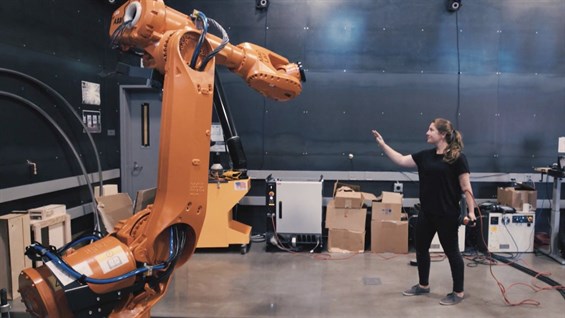 At a time rife with social, political and economic uncertainty so many exhibitions seek to provide refuge and reassurance. In direct contrast, ‘Fear and Love’ aims to unsettle the onlooker. The exhibition made me realise that whilst there exists so much that enables us to disassociate ourselves from the world we are all essentially creating, it is in fact enlightening to be confronted with the reality we have become to some extent numb to. Proactivity is definitely becoming the new black.

Despite the ambiguity central to the exhibition, each piece illustrates with clarity the necessity of an emotional rather than purely objective standpoint going forward and highlights how, irrespective of progressive technologies, human intuition will always triumph.