Fashion’s big night out got political 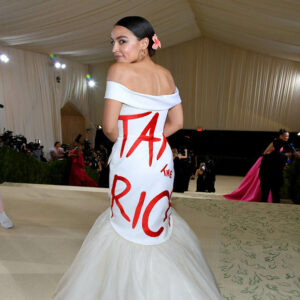 CNC reflects on this year’s MET Gala and the politically charged looks that stole the night on that infamous staircase.

It may not have been the first Monday of May that we are used to, but the MET gala was back this week, hosted at the Metropolitan Museum of Art in New York after the 18 month hiatus due to Covid. The line-up was as impressive as ever with greats from the world of fashion, music, sport and entertainment ascending the iconic stairs. This year’s theme was ‘In America: A Lexicon of Fashion’, with a focus on American Independence. The lavish evening was co-chaired by singer Billie Eilish, tennis pro Naomi Osaka, actor Timothée Chalamet and poet Amanda Gorman – all rising stars of the Gen Z generation. This new exhibition is the first of two parts celebrating American fashion. Part 1, will open in the Anna Wintour Costume Center on Saturday the 18th of September, 2021 and the second part will be opened on May 5th 2022, entitled, “In America: An Anthology of Fashion”.

However this year’s MET gala proved that costumes are no child’s play, with political statements being at the forefront of outfit choices. Whether this was a sign of the times and a reaction to the political turbulence of today, or the thoughts of individuals looking to make a statement. One thing is for certain fashion, has the capacity to transcend the political arenas of global politics and has a reach far greater than any political rally.

The Representative for New York’s 14th congressional district since 2019 opted to wear the sustainable, Brooklyn-based designer brand Brother Vellies, founded by Aurora James, the first black woman to be awarded a nomination for the Council of Fashion Designers of America’s Swarovski Award for Emerging Talent.

AOC opted for a crisp white fitted, fishtail gown with a soft tulle skirt and an off the shoulder neckline. Yet ‘forget business in the front party in the back’, AOC brought pure class to the front and serious political statements from the back with a red scrawled font that read “Tax the Rich”, a bold move when surrounded by some of the world’s wealthiest individuals.

Dressed head to toe in Dior, Cara wore a vest with the words “Peg the Patriarchy” plastered in red on the front, a defiant bold look. Dior Creative Director Maria Grazia Chiuri, fashioned a demure all white look with a cigarette trouser, and white peep toe heel that meant the attention was firmly on the vest. That was matched by the smouldering make-up look and vibrant accent red lip. The phrase offered some confusion, with Cara in interviews explaining if anyone was unclear of the definition people should “look it up”. The phrase was coined and trademarked by Canada-based sex educator Luna Matatas in 2015 to “subvert the system of patriarchy”.

As the co-chair of the evening, Billie oozed 1950s Hollywood Glamour in a dreamy, peach Oscar de la Renta ball gown, inspired by the 60’s icon, Marilyn Munroe. The musicians’ now infamous platinum blonde locks were quaffered into a smoothed bob. However, not just an interpretation of the theme, Billie revealed to her 91.1 million followers on her Instagram, that by agreeing to wear the gown the fashion house would no longer use real fur in their design work. A major, decisive step forward which seemed to mimic the power of the new Gen Z consumer – forcing a new sustainable initiative onto the wider fashion industry.