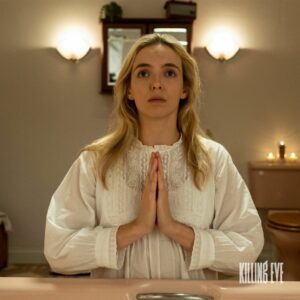 As the hit drama series returns, CNC editorial examines how fashion can be used to craft a narrative and carve out a visual identity. CNC MA student Nisha-Paris Murria reports…

Originally a novel written by Luke Jennings, Phoebe Waller-Bridge has crafted Killing Eve into a darkly humorous love story with interjections of violence, psychotic sub characters and fashionable outfits. Waller-Bridge has carefully added all these elements into Killing Eve during its four season run, yet the main object of discussion is Villanelle’s fashion sense.

Killing Eve follows a young assassin named Villanelle who has been trained to kill people by Konstantin, a Russian member of a group called The Twelve. While the series follows Villanelle’s journey of intricate killings, it also captures her ever changing dress sense. From Molly Goddard’s pink tulle dress in season one to her Loewe floral combo in season four, Villanelle dresses to impress.

All of these clothes however have something in common. They are all luxurious. They have a sense of charm and wealth about them. So why exactly does the costume designer want Jodie Comer, the actress who plays Villanelle, to wear such lavish items? Might it be because they want to emphasise her ‘theatrical, humorous and narcissistic traits ‘, or is there a deeper explanation?

There have been two costume designers behind the lavish looks during the show’s four seasons, Charlotte Mitchell was at the helm for the first two seasons, successor Sam Perry taking the reins for the final seasons.

Charlotte Mitchell’s choice of wardrobe for Villanelle varies from how Sam Perry dresses her due to the assassin’s complex plot narrative. In season two, Mitchell uses dress to accentuate the character’s attention seeking traits, while also emphasising her childlike behaviour. In season three Perry continues to dress her in high end clothing, infusing a classic bohemian sensibility that mimics the vibe to each city she is in. The carefully crafted costumes aid the positioning of Villanelle as the style icon of the show, as well as being used as a tool to showcase the layers of the protagonist’s fragmented personality.

Given that Villanelle is an assassin, you would expect her clothes to have an air of subtlety to them. However, her sense of style is disarming and contradicting, it juxtaposes the nature of her job. Through her use of clothing, Villanelle exploits her femininity as a way to deceive, leading people to believe she has a gentle nature, when in fact she is a psychotic killer. The use of designer clothing highlights how unassuming Villanelle is. Flipping feminism on its head by dismantling society’s pre-conceived ideas is truly a work of art, using fashion as a device to create discursive discussion of femininity. Which poses the question, is it time to rethink the idea of feminism and what it means for women?

The show backtracks on the common stereotypes of spies and assassins. James Bond famously wears suits, conveying a classic masculine style or Charlies Angels where the female spies used clothing to enhance their sex appeal as a way to distract their targets. What is refreshing about Villanelle’s character is that she does not fit into the stereotypical mould, her style is explorative and bold, it mirrors the style of a fashion editor, not that of black-clad assassins. It is interesting to see this side to a character of her calibre, an introspection of a villain that has never been done before.

Throughout season three, Sam Perry gave a lot of thought to Villanelle’s styling, using different outfits to symbolise the character’s thought process. During one of the episodes Villanelle’s loss of identity is honed in on, as she returns back to her native Russia. In these episodes, Perry decided to dress the assassin in a suitable attire making sure she would blend in with her family. Ditching her emblematic outfits and instead choosing the more modest outfits. Villanelle’s character development teetered towards the role of a normal member of society, constantly trying to fit in rather than a lone wolf who is powerfully independent.

Similarly to Comer’s character, we present a polished version of ourselves through our use of style and dress. Whether we dress up when we’re going out or dressing down when going to the supermarket, we all pick clothing items which convey a certain image. Subconsciously making decisions as to which traits we want to communicate. Members of society may decode certain messages from the wearer which could include; wealth, status, gender and sexuality. Yet, some people choose to weaponise clothes to their advantage as Villanelle does, highlighting just how fashion can be used in a myriad of ways. The show emphasises how easy it is to make a person believe in a false identity, carefully curated by what you choose to wear and the connotations and assumptions associated with your chosen outfit.

Killing Eve continually uses fashion and style as a way to communicate an ever changing and complex character, mirroring and heightening the ways in which we use clothing in our own lives. The show proves that fashion is not merely superficial, but a complex system that can be used to one’s advantage to craft an idealised persona. Fashion isn’t just the clothes we wear but an insight into the mind of the wearer, and Killing Eve has shown with a dramatic effect.