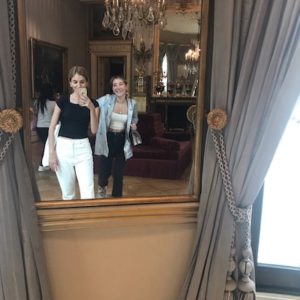 CNC’s Vogue Summer Intensive course is in full swing, here, student Nikol Slatinska takes us on a walk around London as the students get to grips with their new city for the next four weeks.

“London is my favourite city in the world, and it will become yours, too,” my mother said with the utmost confidence before sending me off on my first solo travel adventure. I grew up hearing countless stories about this incredibly diverse metropolis from my parents, who both briefly worked in the Soho area before moving to the United States. After years of maintaining a borrowed image of London in my mind, I’m thrilled to finally experience this city first-hand within the framework of fashion through the Vogue Intensive Summer Course at Condé Nast College.

For our first exploratory excursion, my classmates and I visited three notable locations: Tate Modern, Trafalgar Square and the Wallace Collection, which is holding a Manolo Blahnik shoe exhibition. Looking at vintage heels and contemporary art made for an enjoyable afternoon, but my favourite part of the day was the trek to Tate, my group’s first checkpoint. Winding in and out of Soho’s narrow streets made for a more authentic glimpse into London life and style. I wish I could say I noticed a couple of obvious, widespread trends as I observed the people sitting at cafes, shopping in the street side boutiques or hurrying to their next locations. In reality, however, there were so many unique aesthetics and a perfectly balanced blend of functional and fad-driven styles. The most fashionable cohort of people to observe were other young women. According to their outfits, chunky sneakers are still in, as are casual T-shirts tucked into flowy skirts and patterned scarves tied around relaxed ponytails.

In London, it’s not just the people who provide fashion inspiration. The streets themselves are a maze of old and modern architecture, of long-standing establishments and angular new buildings that manage to catch one’s attention without blocking the overcast sky. Despite its status as the UK’s urban centre, London offers colour and vibrancy on virtually every street corner. During our walk, my group stepped into a vintage clothing store and a bookshop called Magma, where we had fun snapping shots of cool magazine covers.

While the decision to visit these spots was spontaneous, I found that spending time in each store helped us generate a number of creative ideas for future class assignments. It goes without saying that viewing the exhibitions at Tate Modern, the Wallace Collection and Trafalgar Square were also eye-opening, but there’s nothing quite like immersing yourself in the everyday bustle of the city and slowing down to take it all in.