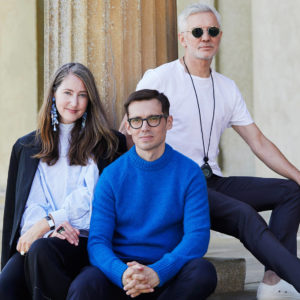 H&M has announced that its next exclusive designer collaboration will be with ERDEM. The Canadian-born, London-based designer, Erdem Moralioglu, whose designs are worn by celebrities and royalty alike, has developed a full wardrobe of his feminine womenswear, and accessories line and, for the first time ever, a collection for men for the high street store.

“I am so happy to collaborate with H&M, and to explore my work on a whole new scale including a menswear collection which I have never done before,” Moralioglu said as the partnership was announced. “It is also such a thrill to work with Baz Luhrmann, one of the most important storytellers of our time.” The Australian film director behind Moulin Rouge, Romeo + Juliet and The Great Gatsby, directed the teaser film for the collection.

Moralioglu launched his label in 2005, and it quickly became one of London’s most successful designer brands. He has won multiple awards, including Womenswear Designer of the Year at the British Fashion Awards in 2014 and he’s a favourite of the Duchess of Cambridge, Alexa Chung and Keira Knightley.

He loves to create pieces that feel modern, yet timeless. “I am fascinated with things that you cannot tell if they are 50 years old or 100 years old or completely new,” he says. He reveals that the H&M collection is very personal with a reinterpretation of the codes that have defined his work over the past decade, from his youth to English films, ‘90s TV shows and music videos. Expect something dressed-up but effortless, with a focus on craftsmanship and an attention to detail that he is known for.

ERDEM x H&M will be available in selected stores and online on 2 November. Watch the teaser film by Baz Luhrmann below.