‘Our religion is also fashion’, said Stefano Gabbana before the Dolce & Gabbana show in Milan last week, in which the brand made most evident their faithful dedication to creation. The entire show was filled with Catholic artefacts, religious references and expressions of emotion, in the most colourful and exuberant way, bringing a real rush of energy to the Italian city. 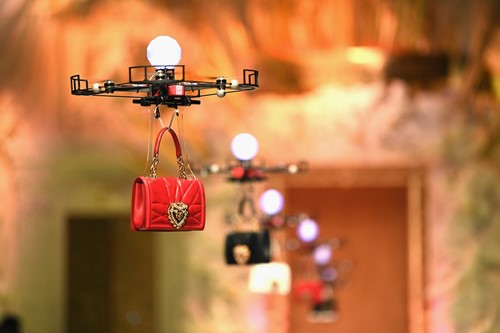 Innovation was one of the main characteristics of the whole collection, starting first and foremost with the opening of the show, which could not have been more 21st Century. Drones carried out the new handbags, to Kendrick Lamar’s ‘All The Stars’, controlled by men and women in lab coats. In red, white and black, with gold handles and embellishment, the bags set the scene for the overall look of magic and romanticism, and gave an undeniably effective introduction for the models to follow. 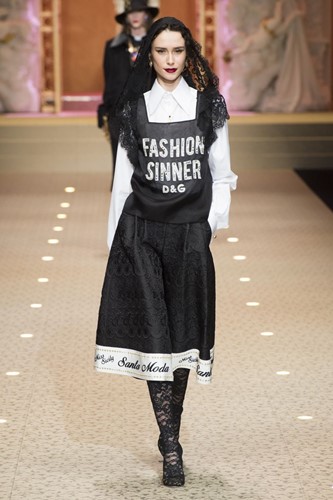 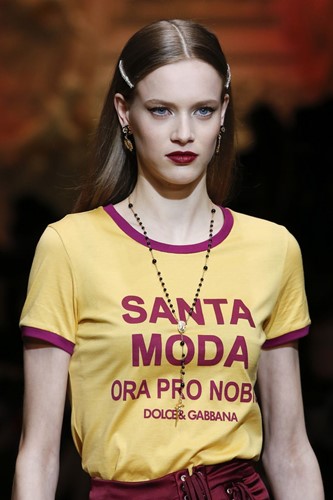 The set was a feature in itself, designed to look like the facade of the Oratorio di Santa Cita church in Palermo. With models walking onto the catwalk under the sign that read ‘Fashion Devotion’, other slogans were seen throughout the 110 looks that were presented such as ‘Fashion Sinner’, ‘Fashion is Beauty’, and ‘Santa Moda’.

Alongside religion, the concept of love was prominent, with the word displayed on a purple velour tracksuit and a black beanie in red, and the heart motif dotted throughout the collection, on stilettos, sunglasses and evening dresses. Making a less-than-subtle statement was what the clothes were all about; this statement being one about the power and passion of fashion. 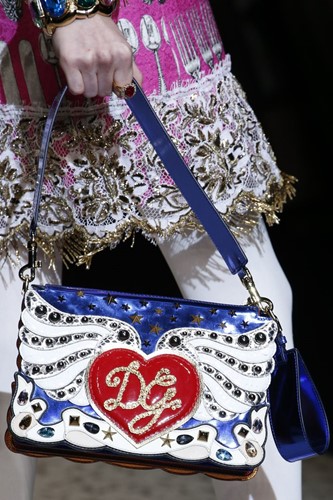 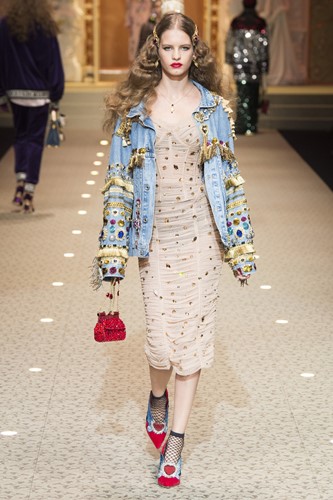 In typical Dolce & Gabbana style, everything sparkled. From bejewelled tiaras, to a fully-sequinned silver-grey skirt suit, to a denim jacket adorned in jewels and gold tassels – over embellishment was key.

Dark lipstick and fishnet pop-socks added an edge to the collection, paired with dresses that were covered in angel faces.

Equality was another theme to take centre stage – all gender identities, races and species were celebrated here – a theme that took centre stage at catwalks across the fashion capitals of the world this season.

An element of safari also twisted its way throughout the collection in the form of a full-length hooded zebra coat, a bear-face beanie, tiger print tights, and a stuffed toy panda, which took the place of a handbag in one look. 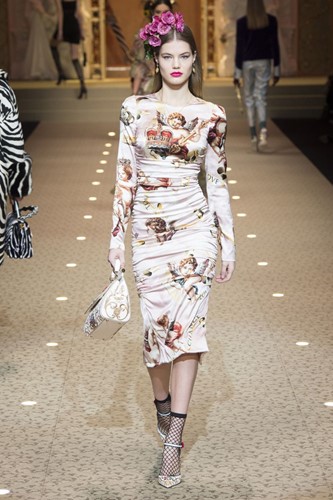 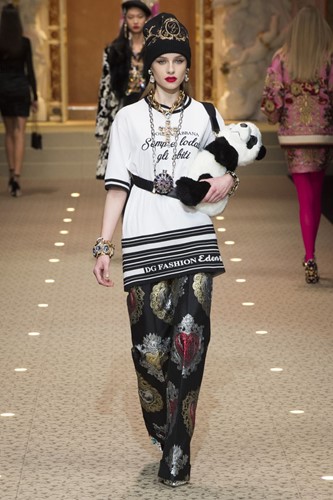 Redemptive, healing or simply a higher force – the new Dolce & Gabbana collection was a reminder of the power of fashion as a bright light in dark times. Whether all-over glitter and a toy companion is your preference or not, there is no denying that the show provides a colourful reprieve that is always welcome this time of year.