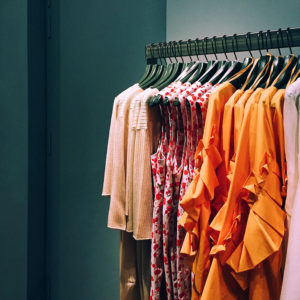 Could the Covid-19 pandemic be responsible for the moment that fast fashion gets put on pause? Second year BA Fashion Communication student, Alice Morey investigates…

Will coronavirus slow down fast fashion?

Covid-19 has well and truly entered the supply chain from the cancellation of major fashion events to the disruption of Chinese production. Is this pause in the fashion cycle just what is needed for the consumer to question their spending habits and return to a slower model of buying, I say yes.

China at the Epicentre of Fast Fashion

China has seen widespread closure of luxury brands from the VF corporation with brands featuring Timberland and The North Face closing 60% of their owned and partner stores. A step emulated by Burberry closing 24 of their 64 mainland Chinese stores. This escalation of the outbreak has resulted in a significant impact on the Chinese market which is made up of 44,000 manufacturers, 11,250 wholesalers and a $30.4 billion import market and $336 billion export market. Tapestry CEO, Jide Zeitlin notes in a statement on the second quarter trading

“the escalating coronavirus outbreak is now significantly impacting our business in China, resulting in the closure of the majority of our stores on the Mainland. We now expect that our second half results could be negatively impacted by approximately 200-250 million US dollars in sales”.

Changes to the Fashion Calendar

It is not only traditional sales which have been impacted, major fashion calendar events have been postponed from the Cruise collections seen with show cancellations from Versace, Ralph Lauren, Prada and Chanel. Giorgio Armani’s A’W 2020 womenswear show in Milan was kept behind closed doors, with the audience requested not to come in. Instead the show was live streamed on Armani.com and across social. A collection which featured in the finale 12 Chinese models wearing archive Armani’s couture spring privé collections from 2009 to 2019, both of which were inspired by China, making a public statement of both sympathy and solidarity. A trend which could be seen in future shows, to keep some sense of normality on the fashion calendar. The Copenhagen Fashion Summit 2020 is the latest event to be cancelled in an attempt to clamp down on the COVID-19 spread and avoidance of en mass gatherings.

A change in consumer attitude has already been recognised with a quarter of British retailers reporting severe difficulties in the distribution of goods. A survey from the consultancy Retail Economics found that 24% of British retailers in fashion say this disruption of the supply chain will have an impact on their business. Seen with a 30% decrease in those entering into public shopping areas, resulting in natural impact and decrease on sales. Although the obvious alternative may be to go online, a survey conducted in conjunction with the law firm Squire Patton Boggs noted that 50% of 2000 consumers asked were apprehensive about ordering clothes online in fear that contaminated goods would be flown in from China.

Priorities seem to have shifted away from good satisfaction from an aesthetic point of view in favour of consuming goods linked to survival and a need to cocoon in ones own space to ride out the epidemic. Garments are redundant with functionality moving to the fore with increase sales in tinned goods, and items with long shelf lives. This is displayed in H&M figures where overall sales in China were down 24 % in the first quarter. At its peak, the company shut 334 out of globally with further closures being rolled out widespread across Europe. With travel restrictions in place the need for new clothing to go in new images for the engrained Instagram culture of no repeat wearing of outfits has been cut at the source.

A re-distribution of resources

Fashion brands have evolved  from a role of inspiration to channel resources to help wider society;  shown in figures reported by Fashion United with donations from LVMH Group of $2.3 million US dollars, Kering Group a further $1 million, L’Oreal has given $720,000 to the cause, Swarovski $430,000 and Estee Lauder and Shiseido $290,000 each. Meanwhile, Chinese conglomerates Alibaba and Tencent have donated $144 million and 43.25 million, respectively to combat the coronavirus. LVMH further announced on the 15th of March that LVMH will start making disinfectant gel at French facilities that currently produce perfume and cosmetics for brands including Guerlain, Christian Dior and Givenchy to help support the French government.

Moving forward it is unclear to know how the fashion calendar will be affected by the COVID 19 virus, whether there will be a long-term impact outside of the current consumer slump being experienced. Whether a natural decline in consumer spend will last and provide the relief needed from a system used to churning out new goods on a weekly basis. Or whether the initial fear will subside, and consumer spending will increase and the repurchasing of clothing will resume as service as usual.