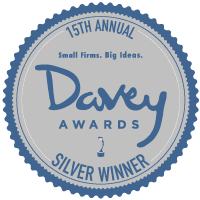 We are delighted to announce that the website of, Condé Nast College of Fashion & Design, has been recognised for the 15th edition of the Davey Awards, receiving a Silver in Best Education Website category.

This year’s Davey Awards, took place in New York on 29th October, where they announced the winners chosen from among 3000 entries from around the world. The Davey Awards honours the finest creative work from the best small shops, agencies, firms, and companies worldwide.

David defeated the giant, Goliath, with a big idea and a little rock – the sort of thing small agencies do each year. The annual International Davey Awards honours the achievements of the “Creative Davids”, who derive their strength from big ideas rather than big budgets. The Davey Awards is the leading awards competition specifically for smaller agencies as they compete with their peers to win the recognition they deserve.

The College’s website has been built and designed in collaboration with Itineris.