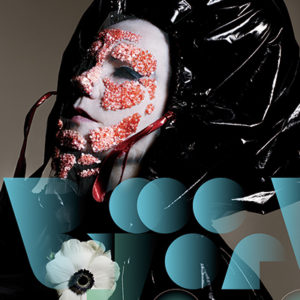 Our third afternoon at college saw all forty students heading for the new Bjork Digital exhibition at Somerset House. In light of this article, I must admit that I wasn’t all too familiar with the name, a statement I’ve learnt would have been better kept to myself. So, as an unknowledgeable ticket holder, I was heading in blind. However, when greeted with a verbal warning about the inevitable onset of motion sickness and a set of oversized white goggles, resembling that of Willy Wonka, I realised this was not going to be an ordinary exhibition, and ordinary it was not.

The next hour plunged us deep into the dizzying world of virtual reality as we made our way through five different rooms, all featuring intense panoramic snippets from Bjork’s new album, Vulnicura. At one point you’ll find yourself racing through the mouth of Bjork in full 360 degree virtual reality. As expected, the motion sickness settled in nicely.

I found this exhibition to be a fascinating insight into, perhaps, the future of music and technology. As sound and vision merge together, Bjork provides a theatrical experience. Similarly, to have a private and personal experience at a public event is a truly unique concept and like nothing I’ve ever experienced before. It is weird, wacky and certainly overwhelming at times, much like Bjork herself, but equally creative and engaging. One week later, I can’t deny Bjork Digital had a lasting impression on me but the jury is still out on whether I necessarily enjoyed it. One might imagine this is the kind of response Bjork was hoping for.