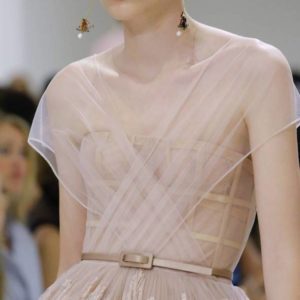 Since taking over as artistic director at Dior in 2016, the Italian designer Maria Grazia Chiuri, has, season by season, questioned what fashion and luxury means to a new millennial consumer. For her autumn/winter couture show she examined the idea of these luxurious clothes being a “private pleasure.”

A tent behind the Museé Rodin was transformed into the closed off world of the Dior couture ateliers – a setting inspired by last year’s blockbuster exhibition, Christian Dior: Designer of Dreams at the Musée des Arts Decoratifs. The exhibition is set to come to London’s V&A next year.

A new subtlety replaced the bold, expressive feminist themes of the house’s previous shows, with a clear change in tone and a fresher, subdued mood. Fluid and delicate designs moved elegantly; there were voluminous gowns as well as suits with cinched in waists and structured cuts, and the odd beret softly complementing the collection. The focus for Chiuri was the cut of fabric by the “petit mains” in the atelier, symbolising an understated mood, in contrast to Chiuri’s ubiquitously branded ready-to-wear.

She stressed that she wanted a “new generation” to really understand what couture is rather than thinking of it as “only as something that their grandmothers had.” Or otherwise, added the designer, “you risk losing it and all the traditions that go with it.” But will delicate, hand-crafted details be enough to capture the attention of the new generation who are enthralled by a world of theatrical and bold branded mania?