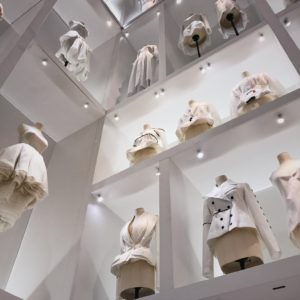 Just entering Christian Dior: Designer of Dreams is impressive. The vast fashion retrospective, at the Musee des Arts Decoratif in Paris, opens with an illuminated wall replicating the grand facade of the House of Dior. Just opposite you can peek into one of the most fascinating rooms that you enter later, filled sky-high with beautiful black and white couture.

The show begins with the history of a little boy in France, presenting Christian Dior’s birthplace in Normandy, his family and his early career as a gallery owner in Paris. Filled with projected moving images on the walls and rare pictures of first fitting at Dior in 1947, the room gives an impressive overview of the early life of the couturier. One of the last images before entering the next room, is of seamstresses standing in front of the couture house, reading of Dior’s death just 10 years after his very first show.

The show moves on to some of his most famous dresses, worn by princesses, actresses and other socialites; Princess Margaret wearing a white tulle dress, photographed for her 21st Birthday in 1951 next to the costume or the black evening gown with a white bow worn by Dovima in front of two elephants, photographed by Richard Avedon in 1955.

This is followed by an astounding serpentine rainbow display of all things Dior – scaled down dresses restyled on mini mannquins, shoes, perfumes, hats, gloves and other Dior objects taken from the 70 years.

Over the following rooms you learn more about the Dior make-up, magazine covers featuring Dior designs and, after walking down the stairs, you enter the magnificent world of Marie Antoinette. These rooms show the similarity between historical styles and Dior designs, from classic French country style, to Japanese and African influences. Christian Dior’s and later John Galliano’s travels inspired their work a lot, so dresses with cherry-blossom prints (most famously in Galliano’s spring couture show in 2007) or Egyptian embroidery have always been a staple in the couture house.

And then, the first of my personal three favourite rooms, a room completely dedicated to flowers and blossoms. With beautiful paper flowers hanging all over the ceiling, the curators show how flowers inspire skirts, tops, prints and embroidery. Also, here is the beautiful relation between couture and perfume, which reminded Christian about his childhood garden full of flowers.

The second part of the exhibition is on the other side of the hall and opens with the rebuilt house front of the Maison Dior. Walking through, you get a sky high view on different black and white designs, followed by a hallway of fame, showing how Dior’s traditional silhouettes were interpreted by his successors

How Yves Saint Laurent added his coolness, Marc Bohan his feel for minimalism, Gianfranco Ferré his love for glamour, John Galliano his wildness and passion, Raf Simons love for details and the female body and Maria Grazia Chiuri who is reimagining the house for the 21st century.

After this retrospective look at all the creative directors comes a room so bright and white, you almost need sunglasses. Almost five rows of white couture, showing exactly the cuts of some of the most amazing dresses in the history of the house. On one side, two actual seamstresses “directrices” are waiting to show you how they work, what fabrics they use and how one of these artworks is composed.

The next room, very dark in contrast, shows outerwear and leads you to the grand finale of the exhibition, The Dior Ball Room. Sprinkled in gold glitter, projected on walls and ceiling, there are almost too many gowns to count. They are just everywhere. And every single one is more breath-taking than the last, more glittering and more fascinating than the other. With this explosion of glamour, the blockbuster show comes to one of the best endings you’ve ever seen.