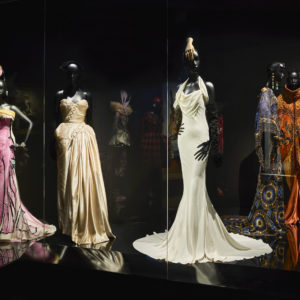 Christian Dior – one of France’s most acclaimed couture houses – is celebrating its seventieth anniversary in a lavish and opulent exhibition – Christian Dior: Designer of Dreams – at the Musee Des Arts Decoratifs in Paris. The exhibition explores the magnificent work of the founder, and his renowned successors, all of whom have ensured the brand’s lasting global influence.

This is the second retrospective to be dedicated to Dior – the first took place in 1987 looking at the designer’s game-changing ‘’New Look’’ which radically defined the post-war hour-glass silhouette for women. This exhibition, however, includes the work of all Dior’s subsequent six artistic directors: Yves Saint Laurent, Marc Bohan, Gianfranco Ferre, John Galliano, Raf Simons and, most recently, Maria Grazia Chiuri, and collectively showcases over 300 haute couture gowns.

Spanning an astonishing 3000 square metres, this is the largest retrospective for Dior and takes the viewer on a journey through the illustrious life of its founder and onto his contemporary influence. ‘’The goal of the exhibition is to show the source of creation and the breadth of culture that Christian Dior and the designers who succeeded him possessed’’, notes Olivier Gabet who co-curated the show alongside Florence Muller. With its first female artistic director, Maria Grazia Chiuri at the helm, whose first collection for Dior featured feminist slogan t-shirts, it is a period of fundamental changes for the brand.

As you’d expect the star-studded launch included Jennifer Lawrence, Karlie Kloss and Bella Hadid, who gathered alongside a list of high profile celebrities and fashion figures to celebrate the opening. As its doors open to the public, this exhibition promises to have a lasting impact.