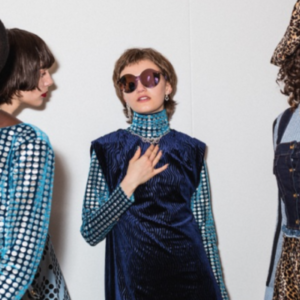 One of the major perks of interning for a fashion house around this time of year is that you get to be a part of fashion week. For the past three months I’ve been interning for the web and digital team at House of Holland and was lucky enough to be involved in the lead up to the LFW show, as well as work during the actual show itself. It was one of the craziest and most surreal days of my life, but something anyone wanting to work in the fashion industry should experience at least once!

The week before the HOH show was intense and action-packed. The phone was constantly ringing, the design team were pretty much working 24 hour days and there seemed to be an ongoing flow of people coming in and out of the office, from stylists, to models, to celebrity guests. One of the most memorable moments during all of this chaos was when Henry’s mum drifted into the office, head to toe in HOH (and absolutely ROCKING it, I might add), stared at a group of models waiting at reception and whispered in my ear, “Gosh, they do look like giraffes don’t they…” But she was right, I’m 5’9 and even I felt like a minion next to them!

As you can imagine, on the day of the show, there were a lot of odd jobs to be done and several trips to the shop were made to pick up fuel like hummus and mature cheddar sticks. Things did get a bit more glamorous when I was given the task of helping Henry and the stylist prep for the show by taking the collection to the venue. It’s safe to say that I was absolutely terrified about having to babysit the entire collection, but luckily it went very smoothly and I felt pretty pleased that I had been trusted with such a big responsibility.

Once we arrived at the Topshop show space my main job was to document everything that was going on backstage for social media. This was quite a daunting task at first, and I felt a little awkward attempting to shove my iPhone in a model’s face while she was having her hair pulled at and eyebrows plucked- not to mention, the other professional photographers also trying to do what I was doing! However I quickly learned that it’s Fashion Week and anything goes- and fortunately most of the models are quite used to the camera attention.

It wasn’t all about getting snap happy and writing a couple of tweets to get the audience in the mood. I also had to make sure that everything I posted would keep the sponsors happy. We were required to put up a certain number of posts on both Instagram and Twitter promoting our makeup (MAC) and hair (Toni & Guy) artists. This can be quite difficult at times because you feel like you’re getting a little repetitive, but I learnt that if you just try and get a bit creative and inject a little of the brands identity into what you’re doing, then you’re onto a winner!

The final highlight was actually getting to watch the show, which is something I never thought I’d be able to do when working backstage. It was such a great feeling to watch Henry’s glamrock flapper gals strut their stuff down the catwalk, knowing that I had a small part in helping the whole process come together.

Working at the HOH AW16 show was incredibly stressful but also truly one of the best experiences, made even better by the fact that Henry was an absolute dream to work for.