Azzedine Alaia; The Couturier at The Design Museum 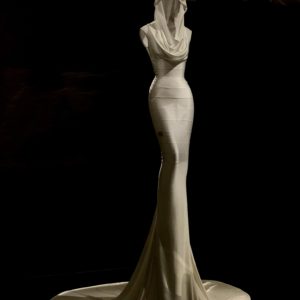 Before Azzedine Alaia died late last year he had co-curated his own retrospective. Recently opened at the Design Museum, the show is a fitting tribute to the North African designer’s life’s work.

Popularised by stars including Lady Gaga, Rihanna and Grace Jones, Azzedine Alaia’s designs were known for being timeless and figure-hugging, a look that he once described as ‘second-skin dressing’. This exhibition beautifully showcases his ground-breaking designs as well as his intriguing life.

Born in Tunisia to a family of wheat farmers, Alaia had talent from a young age. He attended the School of Fine Arts in Tunis in his late teens and after finishing his studies he moved to Paris, where he would live until his death. For a short time Alaia worked for Christian Dior under Yves Saint Laurent and started designing exclusively for French actress and model, Arletty. He continued to work for other fashion houses until he presented his first own ready-to-wear in 1981.

Alaia’s haute couture designs fused the newest bandage fabric technology with dress-making techniques that dated back to the 1800s, to create boundary pushing clothes that chimed with the high voltage glamour of the 80s and early 90s. The bandage material became Alaia’s signature during the 90s, worn famously by models such as Naomi Campbell and Linda Evangelista, and he redefined the silhouette of the era.

At the exhibition you can clearly see Alaia’s interest in other countries and cultures such as African and Spanish art. Dresses with ruffles coated in sequins broke up the sea of his most famous black sequin and velour dresses, finally ending in a grand trio of floor length bandage dresses.

The experience was transcendent, as you felt like you are inside a crystal ball due to the light bouncing off metal and glass screens, that provide a backdrop to the clothes. After watching the short film the exhibition felt even more experiential, as it takes you back to the nostalgic home movies on VHS tapes from the 90s. In one scene we hear models’ names being called as they are lining up backstage before getting on the runway for the Azzedine Alaia autumn/winter 1990 show. As the camera pans across the room we see a short clip of a calm Alaia holding the curtain closed with a large smile taking over his face the moment before he draws the curtain.

This entirely hypnotising film, combined with the simplistic curvilinear forms of the dresses on the mannequins, makes the exhibition an elegant homage to Azzedine Alaia’s life and work.

Find out more about our MA Fashion Communication starting this September