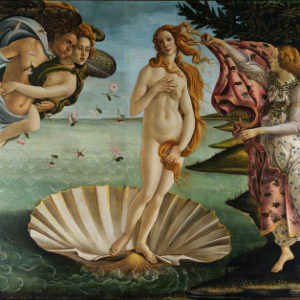 The Italian Renaissance was an art movement of the 15th century that quickly influenced contemporary design, and it is recognisable today not only in the enduring architecture and art but in the world of fashion.

Arguably fashion has become simple recycling of ideas with a twist, so it is only natural that modern designers draw inspiration from such a time of intellectual, philosophical and aesthetic stimulation. Christian Lacroix’s SS06 collection was flamboyantly classically inspired, focusing on the clothing of the era, and indulgent textures. More recently, Alberta Ferretti evoked the Renaissance in their interior-inspired AW collection, combining rich gold with painted florals and skies in probably the most obvious reference to the movement. Dolce & Gabbana have also, rather unsurprisingly, turned to their history for inspiration, not only adding depth and decadence to their designs but also emphasizing their traditional values.

The work of Sonia Delaunay has recently been cast into the light for its vast influence upon fashion since her work in the early 20th century, and following the inspiring current exhibition at the Tate Modern, more designs may be emerging with an air of Delaunay. The easiest influences to see will be in colour palettes, but the most interesting willcome when considering the cuts of dresses and the sense of movement that pervades Delaunay’s work in both shifting spirals and simultane prints. Straight silhouettes feature not only in her clothing design and textile work, but in the figures of her paintings and the simple elegance of these both reflect and are reflected in the perennial popularity of minimalism, which is once again on the rise. Having had such an obvious display in the SS15 Junya Watanabe collection which featured her signature simultaneous circle print it is now time to consider the subtler elements: her use of word and poetry in art pieces which is reminiscent of recent Dolce & Gabbana and Valentino collections; the flowing circles of her work which lend themselves so well to direction and styling. Delaunay has the potential to have a huge impact this year as art itself is undergoing a renaissance and hers was so ahead of its time that it is incredibly current.