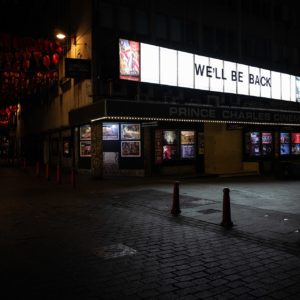 Or rather precedence for personalised, educational and solo viewing? Alice Morey investigates the changing landscape of cinema.

Cinemas are an institution buried deep in the fibres of our society. But at a time where easing of isolation restrictions are at their nascent stages and we are taking the prerogative to educate ourselves on the origins of the Black Lives Matter movement, a preference for easily adaptable viewing schedules, coupled with human curiosity and ingenuity comes to the fore. Replicating an experience which is almost certain to return, yet, with a few modifications.

The Infancy of Cinema

Cinema has a rich, long and celebrated place in British history, with the first cinema opening in London in1896, showing at Polytechnic Institute on Regent Street, a presentation of the Lumière brothers’ new moving-picture device, the Cinématographe. The number of cinemas quickly spread across the country providing the population a place of solace and escapism. People were able to come together to have a shared experience and celebrate the power of cinema. There are 775 cinemas across the UK, but as part of the requirements of COVID-19 lockdown cinemas were and remain closed. Instead, people are turning their attention to a new form of viewing entertainment from the comfort of their own home – streaming services.

During the peak of the pandemic, Nielson reported a 60% increase in TV streaming. With viewing figures in general growing by 17%, an increase of approximately 1.2 million viewers. Cinema is one of the greatest forms of escapism however production times and scheduling can be lengthy. Instead, streaming services such as Netflix capitalise on their own original content being produced. An Omdia media report revealed that in 2019 Netflix released 2,769 original programmes under 657 original titles. The result being an adaptive platform that was able to dominate and capture the mood of the people. This was first seen with the overnight domination of Tiger King which has had 34 million views in the US alone.

The murder of George Floyd in the US acted as a call to arms for people all over the world in highlighting the injustice and systemic racism experienced daily by black people. Key in the fight against this is a growth in education and learning, and for many, this has taken the form of streaming anti-racism resources to help guide and inform conversations. The Criterion Channel, an American video distribution company, has announced a roster of films and documentaries from black filmmakers for free, made available with no subscription. Titles and contributions include Maya Angelou, Julie Dash, and William Greaves. Warner Bros Studio, through Amazon Prime and Vudu, are allowing viewers to rent Michael B. Jordan and Jamie Foxx drama ‘Just Mercy’ for free in the US. Spotify has created a ‘Black History is Now Hub’ with the primary objective to amplify Black voices. Podcasts, playlists, and music including Code Switch, You Had Me at Black, and Higher Learning with Van Lathan and Rachel Lindsay sits alongside playlists Black History Salute, We Shall Overcome and the Black Lives Matter playlist. Demonstrating the value of a shared experience and community characteristics attributed to cinema is made possible through curated and topical content; enhanced and made available quicker through a streaming service. Transitioning film away from the rigid definition is entertainment, but rather a powerful device of education and awareness straight into the home.

Replication of cinema in the home

An adaptable and impressive schedule of content is becoming available for solo viewing. However, the natural human reaction to come together and have a shared cinema experience is shown with people utilising sharing devices such as Netflix Party and House Party, or merely sharing a screen over Zoom to mimic the collective. Next month, open-air cinemas synonymous with 1950’s date nights are back in large outdoor locations across the UK from Blenheim Palace in Oxfordshire to Allianz Park in London. Allowing for people to come together through the power of cinema and to learn and educate further.

What’s next for cinema?

One thing is for certain, cinema will return, the hotly anticipated latest and final appearance of Daniel Craig as James Bond in ‘No Time to Die’ has been postponed – not hitting cinemas until November 2020. The latest installment of the Fast and Furious series ‘Fast and Furious 9’ is now opening on 2nd April 2021. But will we equally see a move to people electing to view content from home, in an intimate setting? With a preference for personalised, curated viewing streams that are adaptive to a new educational requirement.

It is difficult to predict for certain, what the future of cinema is. However, what is for certain is an increased acceptance of a norm for choice and convenience of curated poignant content; aided by the investment in diversity and amplification for black voices means education, and purposeful and considered content will be paramount in designing the future.

Black Lives Matter: Where we go from here?