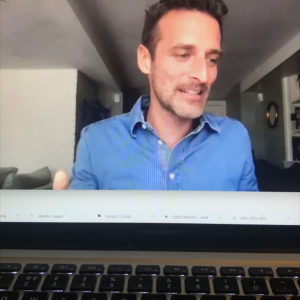 Our Industry talks are in full flow at the Condé Nast College. We were delighted to welcome renowned photographer, Alexi Lubomirski to our virtual lecture theatre over Zoom this week.

Alexi most recently talked to our students in person in May 2018 when he was in London to photograph the wedding of Prince Harry and Meghan Markle.  This week, Alexi spoke to our students from New York about his stellar career shooting celebrity portraits, how to remain creative in lockdown, and how they can be a force for good in the fashion industry.

Born in the UK to a Peruvian-English mother and a Polish-French father, Lubomirski grew up in Botswana.  His interest in photography began when he was given a camera aged eleven, and developed further during his gap year in Peru.  While studying for a degree at Brighton University, his photography interest shifted from social commentary to fashion.

Camilla Lowther saw his potential and introduced him to Mario Testino, and he became his assistant. Towards the end of his four years assisting Testino in Paris, Katie Grand selected him to shoot for The Face and Harper’s Bazaar US.

Since then Lubomirski has amassed many prestigious clients including Harper’s Bazaar, GQ,  Allure and most international editions of Vogue.  He is a favourite with Hollywood celebrities, having photographed everyone from Beyoncé to Gwyneth Paltrow, Natalie Portman, Julia Roberts, Nicole Kidman and Scarlett Johansson.

He is probably best known for taking the official engagement and wedding photographs of Prince Harry and Meghan.

Lubomirski held his first exhibition, “Transit,” in 2008. He has also published three books, a photography book “Decade”, and “Princely Advice for a Happy Life”.  In 2016, he released “Diverse Beauty,” which highlights beauty beyond the ideal presented in fashion magazines and campaigns. All proceeds from his books are donated to Concern Worldwide, a charity for which he is an ambassador.

A force for change

During his talk, Alexi didn’t shy away from what is happening currently with the COVID-19 crisis. He urged our students to use this time to really engage with who they are and to use the gift of “silence” to spark creativity. Speaking about the need to switch off our devices and just think and be, he also stated that “out of change comes opportunity,” and to “use this time to think outside the box,”  as we are forced into introspection.

Lastly, he asked our students to think about themselves, what their values are and who they want to be, and also laid on the importance of starting your career on the right path when it comes to morality. The most important takeaway of the talk being to not look back in 10 or 20 years’ time at what you wished you’d done to make a difference in the industry.