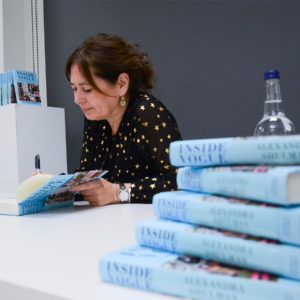 When it was announced that Alexandra Shulman, editor-in-chief of British Vogue, would be coming to speak at the college, word spread incredibly fast. Of all the fantastic talks we had been lucky enough to receive in the past ten weeks, this was the grand finale. Alexandra is to the fashion world what Mark Zuckerberg is to the techie’s – the driving force and living embodiment of the industry.

Aside from providing an insight into her position at the helm of Britain’s most prestigious fashion magazine, the main purpose of this talk was to discuss Alexandra’s newly-published book, Inside Vogue, a personal diary documenting her time constructing and celebrating Vogue’s centenary year. The book, combined with the recent exposure of Vogue HQ in a two-part documentary, meant it could not have been a better time to hear from the woman behind it all. Alexandra arrived, hot off the Eurostar having attended a Chanel show in Paris the night before, and we knuckled straight down to business. Gala dinners, plus sized models, diary musings and the pressures of being responsible for the ‘thing that is Vogue’ were just a few of the topics addressed, all of which were delivered with compelling humour. For somebody who is living a life we can only dream about, Alexandra was surprisingly relatable. After the talk, as I waited in a long and less than orderly line to get my book signed, I wondered if Alexandra ever felt wronged by the media portrayal of her – which judging from the last hour did seem entirely inaccurate, though I’m sure a business woman of her account had far more pressing issues on her mind.

Fifty signed books and fifty selfies later, Alexandra made her departure. It was an exciting and inspiring afternoon for us all and as I made my way back towards the tube, I hoped we might cross paths again in the future.