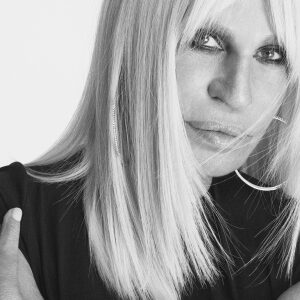 Condé Nast College is thrilled to spotlight another of our new Advisory Council members, the appointment of Donatella Versace. The esteemed Chief Creative Officer of Versace, will work alongside other council members to help define the curriculum and educational direction of the college.

Donatella Versace is the Chief Creative Office of Versace, a world leading, iconic, Italian luxury fashion brand. Synonymous with their lavish creations with their medusa head logo, chain mail textile and close relationship with the supers. Donatella’s late older brother Gianni, founded Versace in 1978, while Dontella was a student at the University of Florence. Initially starting out as an assistant, her role quickly evolved to a decision making level and was appointed as head designer, in 1994 for Versus (the first diffusion line of the luxury fashion house). After her successful supervision of campaigns alongside Irvin Penn, Helmut Newton and Richard Avedon and following the sudden death of her brother, Donatella became artistic director of Versace and since has redefined Versace in a new era for a new generation. This has seen the evolution to Versace Home and the Palazzo Versace hotels.

Returning IRL to fashion week for the S/S 22 shows for any fashion house was an adjustment, but for Milan Fashion Week Donatella presented twice, once with Versace and then a collaborative show with Kim Jones, Artistic Director of both Dior Menswear and Fendi Womenswear and Couture.

Led by British songstress Dua Lipa, the Versace S/S 22 show was a triumphant return after two years away from the runway. Black tailoring, spliced with colourful Versace print poked through distressed seam lines, held together by signature safety pins. The collection evolved to complete co-ord looks in full print. The collection was a masterclass in transitional, seasonal dressing with effortlessly flowing silk trousers, accompanied by knits and tied macs. The runway was shown in full colour with looks, in neon tones. Naomi Campbell, another of our Advisory Council members, works a two piece hot pink suit with an orange crop underneath. This gave way to a stream of impossibly short minis in the brand’s signature chain mail in dazzling colour – signifying that Versace was back!

This was a moment we did not know we wanted, but now we have it we cannot not imagine not having. Presented by an army of supermodels from yesterday, today and tomorrow, including the likes of Kate Moss, daughter Lila, Kristen McMenamy, Paloma Elesser and Amber Valletta, who presented the switch-up of Kim Jones re-imaging of Versace with a streetwear, luxe twist.

This was followed by Gigi Hadiid, Emily Ratajkowski and Naomi Campbell infusing unadulterated glamour to Fendi, in an effortless, cool yet sexy aesthetic, with a collection of revamped 90’s inspired minis and the infamous A-line chainmail gowns.