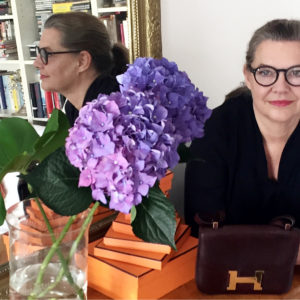 In life it often comes down to one specific question. I am not talking about the meaning of life, but the question is – are you a Kelly or a Birkin Girl? If owning your very own Hermès Bag isn’t one of your life goals, are you really interested in fashion?

Nicole von Bredow is the type of woman we look up to when we are in our mid-twenties. She is the woman we all want to become. Without knowing a soul, she moved to London twenty-something years ago and has had a remarkable career full of glitz and stars ever since. Not just the Hollywood kind! 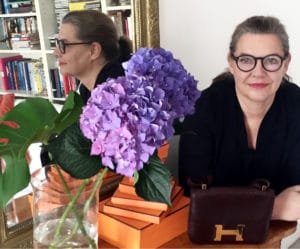 Today she is an astrologer writing horoscopes for German magazines. Her career in journalism was forged back in the day in Germany, where she started writing profiles and interviews for Marie Claire and GQ. Today she focuses clearly on her work as a highly successful astrologer and life coach.

But the real reason for visiting Nicole in her flat in Little Venice, is her enormous collection of very special orange boxes. For, in her own words, Nicole is an “Hermès Addict”. Her collection ranges from towels, teacups, scarves, belts, shoes and collars for her darling-cat Moses to the very important bags.

One of my first questions after walking up the four floors to her apartment is, if she is a Kelly or a Birkin Girl. “I’m a Kelly-bag-Girl. I don’t like to carry a heavy bag Birkin on my arm. The Kelly has the advantage, that you can carry it with a shoulder strap.”

The big love-story between her and the French brand started early when she was a little girl. Her mother was an unabashed fan of the precious bags and it was she who made Nicole into a Kelly Girl. “I was allowed to play with my Mom’s bags, but there were two bags which were completely forbidden. Her Kelly bags.”

I learnt very early that this was something very precious, and I wanted one for myself from the early age of seven. One of my mother’s Kelly bags had been given to her by her grandmother for her 25th birthday. My great grandmother herself loved the brand. She was a keen horse rider. Her saddle was made in Paris by Hermès.

She is not just a Kelly Girl. Her collection is filled with unique pieces from different decades, often found in vintage stores or online. Nicole is a bargain shopper, she loves scrolling though Vestiaire Collective and eBay, always looking out for the best and most unique pieces. “Other people kill time by watching Netflix – I scroll through the French or Canadian eBay sites, looking for ‘trouvailles’ – something vintage and rare from Hermès.”

One of her favourite finds is a navy blue “Sandrine”, a very rare model named after Jean-Louis Dumas’ daughter. Whilst we were looking over her collection filled with the history of the House of Hermès she kept on finding yet another piece which she’d almost forgotten about. In every drawer possible, even the smallest ones in her desk, another little orange box crept out of its hideaway. And after spending some time surrounded by so many of Hermès uncountable objects, it almost seemed natural that Moses just casually walked past and started playing in his little Hermès House.

But like any great collector, Nicole has her favourites, and they feature her other big passion, stars. Her favourite piece is a golden pendant, which turns out to be a pill box. It resembles the constellations of the zodiac and is on a long chain together with the other finds she has made over the years. “I found the pendant in a flea market in Paris. Neither the seller nor I were aware of what we were looking at. I only realised years later when I had a closer look and found the Hermès stamp inside the ball.”

Overwhelmed by the sheer size of the collection, we decide to take a break and sip our tea out of Hermès cups. We chat a bit about her career, the current constellation of the stars, how she never remembers names but knows every birthday by heart.

And after a while, she tells me how she even once met one of the Hermès family, no less than Monsieur Jean-Louis Dumas. Dumas is known today for turning the luxury manufacture into a serious fashion house.

“The press was invited to Paris and we were overwhelmed by the whole set up: a Moroccan theme with a lot of little tables, where Arabian food was served. Jean-Louis Dumas went from table to table and talked to all of us. He was so breathtakingly charismatic, yet humble. After that I was even more infatuated with Hermès.” Jean-Louis Dumas was the one who expanded the brand internationally, hired Jean Paul Gaultier and later Martin Margiela for the Women’s RTW collection.

After reviewing for one last time before we leave, some of the most-wanted luxury goods in the world, Nicole’s Collection has made us realise that orange has always been the better black. 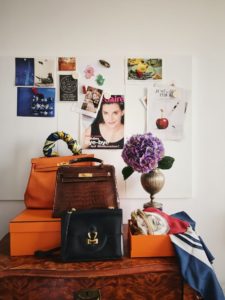 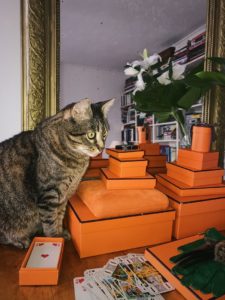 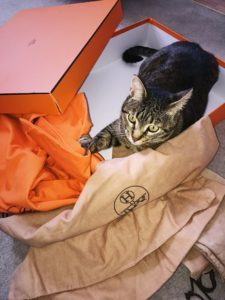