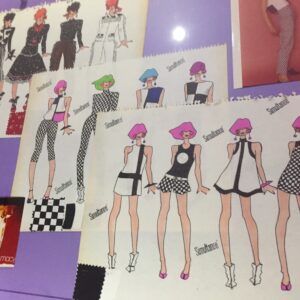 The country waits in anticipation for England to play the final of Euro 2020 versus Italy on Sunday, the first major men’s tournament final for the team since 1966. Ahead of kick-off, CNC looks back at the key fashion moments from 55 years ago: featuring mods, minis and sci-fi muses.

Whether you choose to wear a football shirt, sport an ensemble made entirely of red and white, or maybe this is the moment you choose to break out the pre-lockdown splendour and fully dress up for the occasion. 55 years ago we were firmly in the midst of the swinging sixties, the dawn of a pioneering pivot in fashion, Twiggy Lawson reigned supreme with her waif-like figure and elfin features. Hemlines shot-up above the knee for the first time and bold primary colours accompanied by space-age accessories were in.

The self-taught designer became synonymous with the 60’s fashion movement, breaking the rigidity of the mature, tailored, restrictive garments offered by other high-fashion producers. Her clothes played with scale, proportion and ‘mod’ culture.

Similar to the zeitgeist of today, there was a cultural rebellion stemming from the streets and rippling into the political framework of the time. A change in music, art and sexual liberation of men and women was on the political agenda for the first time. This sudden shift and relaxation of the public consciousness was brought about through a counterculture movement spearheaded by young people.

A similar comparison can be made of the growing consciousness to the climate emergency, brought about in the UK where an estimated 10,000 school children across 60 locations walked out of school in February 2019 to take to the streets and protest against the older generations’ inaction towards the environmental consequences of climate change. This action thrust the environmental crisis both into public consciousness and onto the political agenda – a reflection of the 60’s with the legalisation of the contraceptive pill and the sexual liberation social movement.

It was not just a new found political freedom that inspired the fashion of the moment. The space race was on, and futuristic fashion took-off on the highstreet. André Courrèges, who initially honed his craft working for Balenciaga, launched his own fashion house at the turn of the decade in 1961. Made out of heavier fabrics, such as gabardine, stark shapes were created, with cut-out midriffs. Accessories were given their own sci-fi make-over with flat boots, goggles and helmets mimicking the astronauts’ spacesuits – while this space age aesthetic was given a couture make-over through designers Pierre Cardin and Yves Saint Laurent.

These European designers championed the softening of silhouettes and showcased the new synthetic fabrics which came to market. Natural fibres were replaced with modern plastic-based fibres, such as Perspex, PVC, polyester, acrylic, nylon, rayon and Spandex. It was not just the base fabrics which were transformed in this era, but also new fixtures including vinyl and large zips, which helped to revolutionise garment forms, such as the visor hat. Potentially one of the most striking of this time was the ‘Paper Dress’ of 1966 –  these one use garments were made of cellulose, rayon or polyester. A nod to the commercialisation of the time period and a move towards fashion being aesthetically fun and a novelty item.

Read about how the Vogue Foundation  students prepared for the exhibition